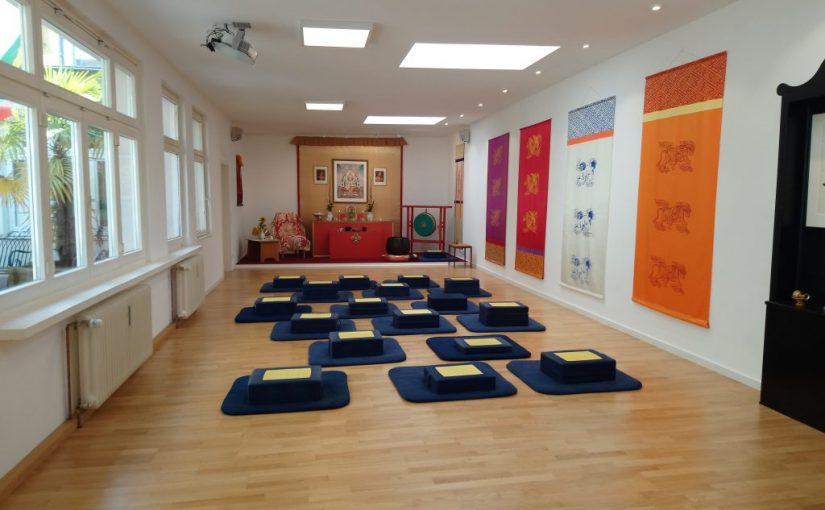 Description of Center: Cologne is a city center with about 85 members, down from 110 several years ago. For the past 5 years, the center has rented space in the center of the city.

For the past 5 years the Cologne Center has focused on community building. One aspect of this process has been the development of an informal culture change group which has helped to initiate structural changes in governance and practice and education.

The beginning of the culture change approach was in 2018 when the Center began holding “process days” to discuss the crisis in Shambhala. These discussions were the beginning of what is now known as the culture change group.  This is an informal group of people, open to anyone, who meet on a regular basis to talk about cultural and leadership issues in Shambhala. The ideas generated by the group may be utilized by Center leadership. The group organized several weekend training sessions around understanding abuse and trauma, which were facilitated by a person from the German Buddhist Union, who is a trained trauma therapist. The training gave the sangha the groundwork to be able to go forward, i.e., to be able to say that the community is taking the issue seriously, regardless of whatever anybody did or didn’t do.  (For specific information about the training, possible contacts are Arnd Riester, Sabina Rolf, and Anne Von der Eltz.)

This endeavor led the culture change group to explore other issues including the future governance and policies of Dechen Chöling, the European land center.  The goal was to include more voices in Dechen Chöling’s decision-making. A retreat was held in 2019 to build community support for the European sangha in the face of the crisis.

In 2020, the Cologne Center’s Council adopted a Statement supporting multiple paths of practice. This was a way of ensuring that the space would be open to everyone and responding to the diverse interests and positions of various members of the sangha. For the Statement, see https://shambhala-koeln.de/wp-content/uploads/sites/10/2020/09/Cologne-council-statement.pdf. The Statement laid a basis for going forward in a collegial way.

On Shambhala Day 2022, the Center officially designated three teams to oversee each of three areas of practice and education. The planning for this approach began in summer 2021. Center members were invited to be part of the teams and interviewed prior to selection.  One team of two individuals focuses on the Shambala path, including Sacred Path and Warriors Assembly, and works to schedule programs, invite teachers and organize support staff.  Another team of two people was invited to put together opportunities to practice and study Buddhist teachings. This practice stream may draw from but is not based on existing Shambhala curriculum. A third team of two people focuses on and holds the space for the teachings of Sakyong Mipham Rinpoche.  All programs open to the public are publicized on the Center’s website. Students of the Sakyong also practice privately at the Center. The teams meet with each other regularly; the Center Director or another designated individual is responsible for scheduling and similar tasks.

Culture change in the Center has also been supported by adhering to a legal structure that requires a President (Center Director) and Treasurer to be accountable to the membership base rather than being appointed by the leadership of Shambhala International as was previously the case.  There is an annual membership meeting that reviews the appointments of the President and Treasurer and reviews the budget.

At the same time as the Cologne Center has introduced these changes, the cultural change group has become a regional group including members of other Shambhala centers in German-speaking Europe.

Evaluation of Innovation: The Center’s membership feels that creating the Statement was a good foundation for the process and changes made later, including the practice and education teams. However, a few people with strong positions that were not adopted did leave.

Other innovations: Meditation sessions and classes (including Shambhala levels) are hosted by different teams, separately or together, and almost always have two leaders, one male and one female. Generally, one of the instructors is more senior.  The Center has continued its practice of introducing meditation to newcomers over four weeks with body, breathing, mind and Shambhala culture introduced one at a time. This presentation is drawn from the Four Foundations of Mindfulness. Teachers and meditation instructors are allowed to arrange or cover shrine photos as they see fit.