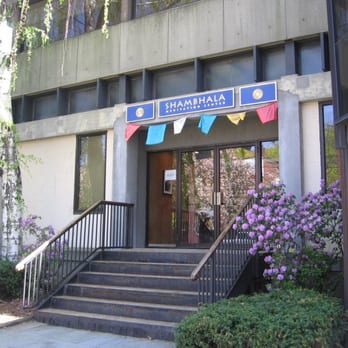 Description of Center: Boston’s Shambhala Center is located in Brookline, MA, right over the city line from Boston. The center has around 100-120 members, down from 150+, but many of those members are inactive.

Shambhala Training:  In January 2022 people who had completed the five Shambhala Training levels were invited to participate in a program called “5 Levels in Five Weeks plus One.” The group met online for 6 weeks on a weekday evening to discuss the practice and logic of each level and reflect on the format and content. The sessions were led by experienced and new Shambhala Training Directors, with old and new generations included in each team. A sixth wrap up meeting was held. The process was intended to rebuild the Shambhala Training community. Coincidentally it brought together Shambhala Training participants from all eras of Shambhala history and identified ideas to make Shambhala Training more relevant, inclusive and accessible. About 30 people attended. Each session included breakout rooms in which participants responded to thought-provoking questions which the organizers had developed. (See Boston – Breakout questions from 5 levels in 5 weeks, 2022.docx for these questions.) The insights that came out of the sessions included identifying cultural baggage, particularly for people of color, associated with the word “laziness” in Level 1. In addition, some people found the forms triggering or intimidating, for example, the use of the word “interviews”. There was discussion about how to make the practice and experience of Level 2 more trauma-informed. There was also discussion about Shambhala Training as a stand-alone experience rather than as part of a path to a vajrayana community and a specific teacher (i.e. SMR recently).

This process along with other concerns led Boston to make some changes in presenting Shambhala Training Level 1 in spring 2022. The program was called “Weekend 1” rather than using the term “levels.” The weekend was team-taught, teachers wore name tags but not formal clothing, and the sense of hierarchy was minimized. Teachers taught from the cushion rather than a chair, water service was deemphasized, and students were not expected to stand when the teacher entered.  A guided meditation on self-compassion by an assistant director was presented on Sunday. Analogies and examples tried to be more socially relevant and inclusive. Other kinds of formality were also relaxed: small group meetings replaced interviews although one-on-one conversations were offered, and escort procedures were made less intimidating.  (Upon further evaluation the Center has decided to go back to one-on-one conversations but with more explanation of the process and the opportunity to decline participation.) During the Level 1 presentation of “genuineness” and “not deceiving” – in lieu of “laziness”- the recent ethical problems in Shambhala were discussed, without reference to specific individuals. The 3-year ethical crisis was mentioned as part of the first talk, also without naming individuals or the specific events, just as a way to be open and transparent about what our community has been through.

Evaluation: The Center was pleased with the success of Five Levels in Five Weeks and the participants strongly bonded.  The Shambhala Training Weekend 1 was successful, but organizers were disappointed in the lack of racial and ethnic diversity.

Other Pertinent Information regarding the innovation: Boston felt that changes in presentation were needed to signal a change in Shambhala culture.

Other innovations: Museum style wall notes have been added to explain the various banners, iconography, and calligraphy on the walls of the Center. The Center is also training its meditation and teaching staff on how to respond or to be better trauma-informed. A new Community Open House on Wednesdays in person has just started, where the facilitators (team taught) begin with introducing themselves and a few words of welcome and some meditation instruction, then a topic of their own choosing, and then 40 minutes of discussion, intended as a way to bring out the wisdom in the room, rather than a sage-like teaching style. The Center has a four-person anti-racism leadership group and participates in a multi-center anti-racism collaboration.